Tron’s [TRX] price resurgence was evident since it was one of the few cryptocurrencies that showed upward price trends on the one hour and one day charts, at press time. The Justin Sun-led cryptocurrency saw another price hike on 23 March, making it the biggest gainer in the top 20 cryptocurrency club.

At the time of writing, Tron was going up by 6.37% and was trading at $0.0242. The cryptocurrency held a total market cap of $1.615 billion, with a 24-hour market volume of $263.862 million. A majority of the market volume was shared between Bit-Z and Huobi Global, two popular cryptocurrency exchanges. Bit-Z witnessed Tron transactions worth $22.847 million, while Huobi Global recorded $20.829 million in TRX trade. 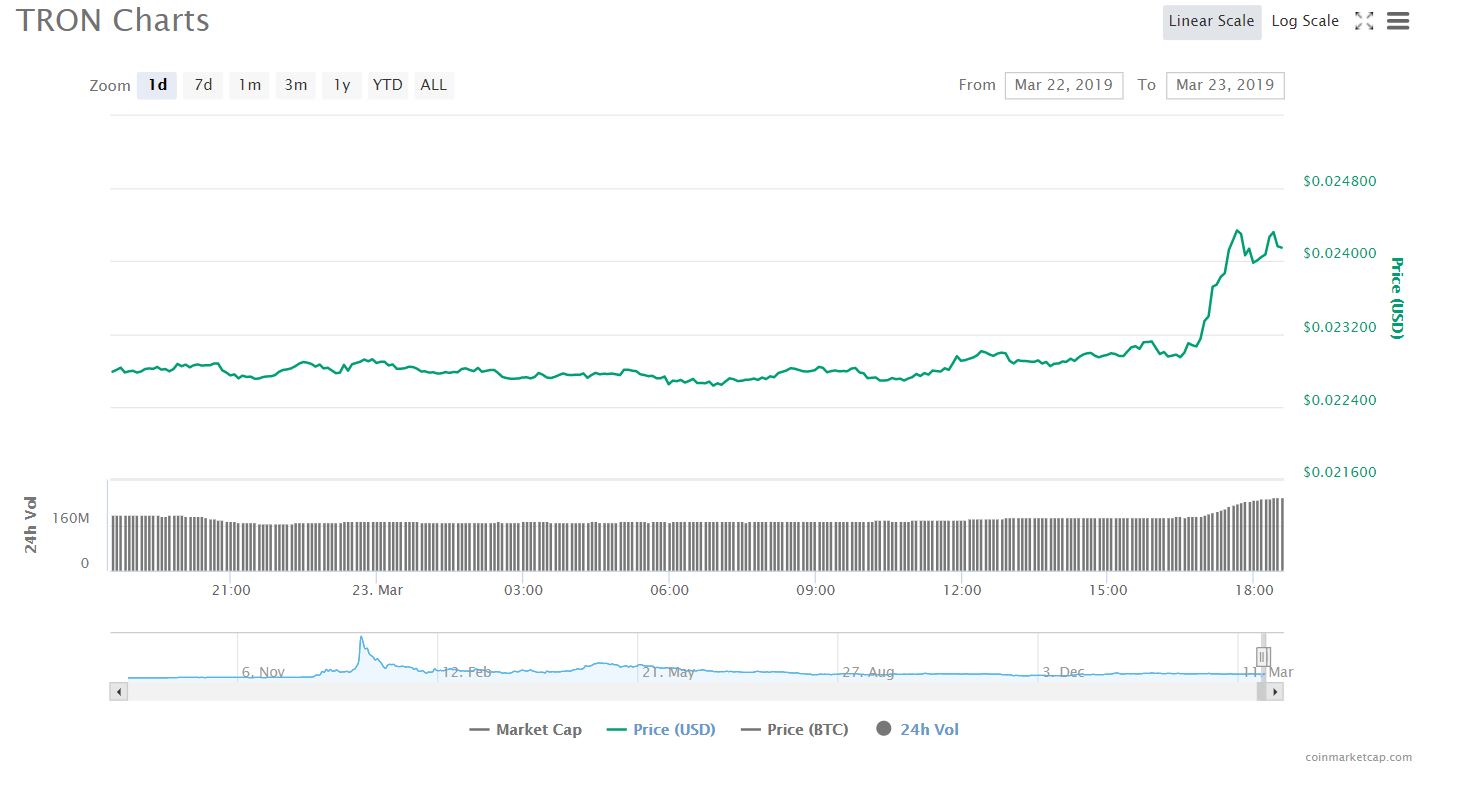 Tron’s price shot up from $0.0229 to $0.0243 in the space of two hours, forming an almost perpendicular spike on the chart. Some speculate that Tron’s sudden rise was due to the Tron-USDT support announced by Huobi Global and OKEx. Huobi Global had announced,

“To meet users’ multifaceted needs for stable coin trading, Huobi Global is going to support the TRC20-based USDT (USDT-TRON) launched collaboratively by TRON and Tether. At that time, Huobi Global will support USDT of three forms: USDT-Omni, USDT-ERC20 and USDT-TRC20(USDT-TRON).In the future, Huobi Global will also cooperate with TRON for the airdrop to USDT-TRON holders. The details will be noticed via announcement, please stay tuned!”

The Tron-USDT partnership put Tron back in the limelight following the advantages and benefits listed by Justin Sun and the Tron Foundation. Sun had previously said that the latest partnership will “blow the Omni-USDT partnership out of the water.” He also focused on the low transactions fees incurred by the USDT-linked TRX token.

Engineering graduate,crypto head and Arsenal fan. Is fascinated by technology and all its marvels. Strictly against pineapple on pizza.