The price fluctuations in the cryptocurrency market have been an ongoing event, with several coins witnessing bullish and bearish trends. The start of the new week gave way to another cryptocurrency siding with the bulls; Tezos [XTZ].

At press time, Tezos was trading at $0.466 and was rising at a rate of 10.88% against the US Dollar. The total market cap of the cryptocurrency was $283.252 million, with a 24-hour trading volume of $607.489. The total XTZ trade was primarily split between UEX and BitMax, two popular cryptocurrency exchanges. 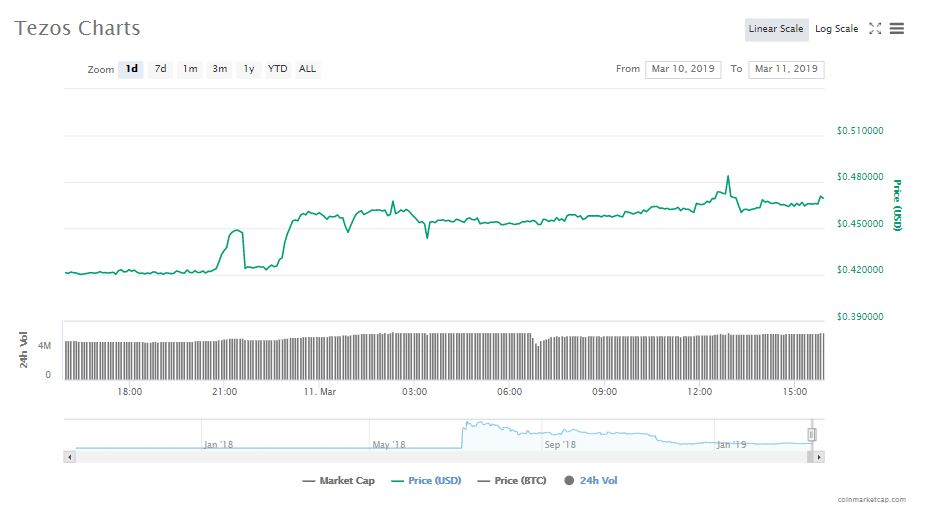 UEX had control of $1.684 million worth of Tezos transactions, while BitMax had a grasp on $1.115 million of the total XTZ trade.

One of the reasons for the coin’s sudden rise can be attributed to the Winklevoss twins talking about at a recent conference. They said,

“The next few months will be particularly fruitful for the cryptocurrency market with a lot of developments coming in. There are many with good projects with Ethereum [ETH] competitors like Tezos and ZCash.”

XTZ was at the center of multiple controversies of late, with the latest issue being that multiple Tezos wallets were found vulnerable to blind signature attacks. A Reddit thread stated,

“All major Tezos wallets we tested except two, are vulnerable to a simple yet catastrophic attack that can lead to loss of funds (blind signature vulnerability).”

“Cryptocurrency wallets were meant to be trustless, but most Tezos wallets are not… When you’re signing any tx with these wallets you’re trusting the server (RPC) to send you money… The RPC you rely upon could turn malicious (e.g. be hacked) at any moment in time, with no way for you to detect it.”

Engineering graduate,crypto head and Arsenal fan. Is fascinated by technology and all its marvels. Strictly against pineapple on pizza.