Bitcoin’s Lightning Network has been one of the most instrumental scaling solutions for the cryptocurrency, since its inception. The second layer open protocol system was officially launched on the Mainnet in January 2018. However, it only recently picked up popularity due to the ongoing Lighting Torch experiment.

According to recent reports, the Lightning Network has more active nodes than the combined numbers of XRP, Litecoin and EOS.

Data produced by longhash.com indicated that the Lightning network had 3,884 active nodes with active channels, at press time. Bitcoin [BTC] and Ethereum [ETH] were the only cryptocurrencies with a higher number of active nodes, with 10,603 and 7,580 nodes respectively.

The combined number of active nodes acquired by Litecoin, XRP, and EOS was approximately 3300, an indication of the Lightning Network’s active utilization and rapid growth.

At press time, Lightning Network’s channels held BTC worth over $3 million, equivalent to around 759 Bitcoins. This suggested that the LN’s channel capacity had increased by a factor of 100, since February 2018. The graph below indicates the sum of channels value, since the launch of the Lightning Network.

According to data from 1ML.com, the Lightning Network had 7,320 nodes, at press time. In February 2018, the number of active nodes in operation was close to around 618. This remarkable growth marked an increase of around 532% since last year. 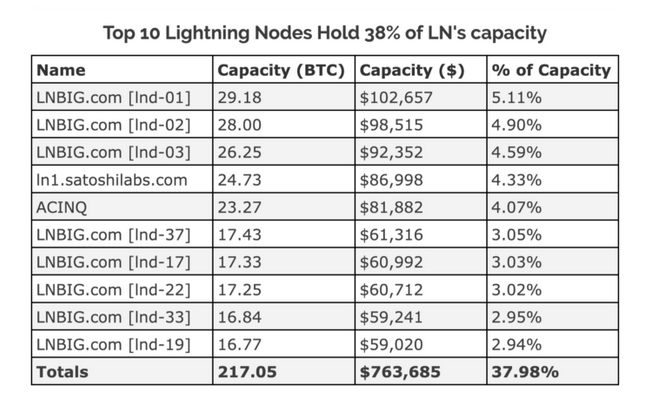 However, a major criticism of the Lightning Network is the possible centralization of a few large nodes. According to Diar, it was observed that 10 of the largest LN nodes commanded over 53% of the network’s capacity.

At the start of 2019, the 20 largest LN nodes had 38% of the network’s capacity. Despite improvements in distribution, over-reliance on larger nodes was still prominent.